These next few days were like going through a time warp between summer and winter in the same day.  It was quite bizarre.  On these days we did some more GeoCaching, made our own trail, went sledding in the snow, hiked across a waterfall, and enjoyed the Mt. Rainier area.

Our first day scoping out Mt. Rainier was a busy one and we didn’t even get to see the mountain!  However, we had an absolutely blast!  The day before on our drive into town we had already scoped out a few spots to stop and hike along the way.  This helped make the day a little easier.  Being that the house we rented was not equipped with internet…or cell phone signal, we had to rely on Blanton’s Market in town for their free wi-fi.  Don’t fret, we did go in and buy something every single time!  If you are in the Packwood area, Blanton’s really is a great little grocery store with very reasonable prices and fresh fruits and veggies.

Alright onto our day.  Our first activity…snow sledding.  Yes…you read that right, snow sledding…in June!  We had a blast.  It was pretty cold, about 34 degrees, 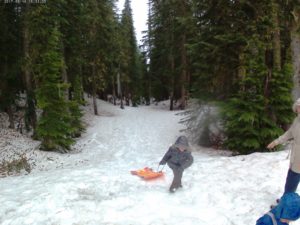 but for the most part we had plenty of warm clothes.  Poor Evan though, we didn’t quite pack the right pants for him and his pants weren’t really water proof.  So he rode around in the car without pants on afterwards for a little while.  He didn’t care though, he had so much fun sledding it made it up for all of it.  The house we were staying through AirBNB had a sled they offered for us to use so we took full advantage and were just lucky enough to find a great spot to do it.  Click here to see a funny video of our hiking adventures, click this link https://youtu.be/sg8ff_iMCKg

Anyone know what the best kind of hikes are?  The ones were you rarely run into a soul. 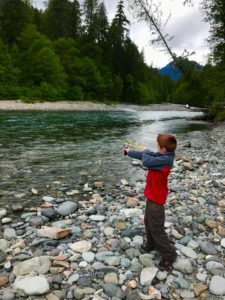 There’s just something about the ability to get out into nature on a random trail with only one parking spot for a vehicle and making it your own.  I don’t even believe this trail had a name to it as it didn’t appear on my Washington Trails App.  However, it was very quick, and had an amazing view of the river  at the end.  We threw rocks, walked across a series of logs that had piled up and just enjoyed the atmosphere at the bottom of the mountain where there was no rain or clouds.

I’m not going to lie, I really wish we had delayed our trip a few weeks so that 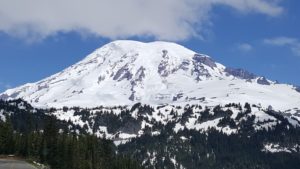 we could have had better weather and trail conditions.  However, had we done that we would have encountered so many more tourists on the roads and trails of Mt. Rainier.  So, because of the weather and the shear number of people, we didn’t spend much time near the visitor center or driving around.  We did the one drive through the park so that we could saw we did it, and came away with the view to the right on the one sunny day.  That day was pretty incredible as every turn we made we were fortunate to have a different perspective to see the mountain.

This hike was really pretty interesting.  It was one of the more strenuous hikes because it was essentially straight up.  As we hiked up, we passed multiple groups coming down who said they turned around because they couldn’t pass, 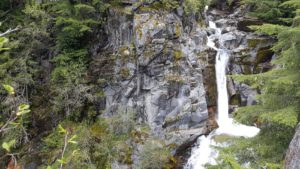 the snow became too difficult.  The hike itself had some really pretty view in the short distance.  However, we did come to an area where we could not pass with the kids.  It was what looked like was a usual slanted rock stretch heading straight down about 200 feet to the bottom.  What made this difficult was the snow build up.  It was just any snow build up.  No, this snow build up had half way melted and had left what was essentially a hollow cave/bridge for you to walk over.  It was probably at the most 18 inches thick, so walking across it was pretty dangerous.  We chose not to bring the kids, and in fact I was the only one that kept going.  I knew by looking at the WTA app that I wasn’t that far from the last waterfall, maybe 3/4 of a mile.  I made it across and started jogging.  Without a carrier and other baggage, it felt like I could run for days…that didn’t last long though haha.  I eventually made it to the more difficult snow area and I just kept sinking down in the snow. It was actually pretty painful on my knees catching me off guard each time.  The view was so well worth it though and if there was more time I would have kept hiking even further.

Now technically this trail wasn’t within Mt. Rainier National Park.  It was actually part of the “sister” park the Gifford-Pinchot National Forest.  What was amazing about this trail was we were literally the only people anywhere within miles. 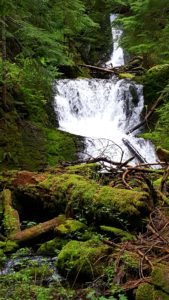 We traveled up a random forest service dirt road.  It appeared to be serving more as a logging road lately as they had been doing some planned clearings to help the over growth.  The hike itself wasn’t difficult, finding the geocache on the hike took a minute, but it was fun.  The hard part was finding the other geocache at the end of the trail.  We spent probably an hour trying to cross the creek where the trail typically crosses.  However, the water must have been extra high this time of year and didn’t give us anywhere to cross safely with the kids.  So we ended up leaving our daughter, who had fallen asleep in the carrier, with my mother-in-law and backtracked a little bit to cross at a place where a small tree had fallen across the creek.  Just because the creek is only 2-3 feet deep and 15 feet wide, doesn’t mean it is easy or not scary to have your 6 year old cross.  However, him and I and Laura all made it across. We then double timed it around the trail.  We had to cross the creek again up stream from the waterfall.  This crossing was much easier.  When we finally made it to the end, it was truly a beautiful view.  With the clouds and mist it was an eery view that was really different

from normal view that made this unique.  We never did find the geocache.  There was so much heavy snow around that was packed tight, it was most likely buried.  We then proceeded to go back down.  What we realized when we started following the trail down is that when we were first trying to make it up we couldn’t really find the trail and there were a lot of fallen trees headed straight up hill. 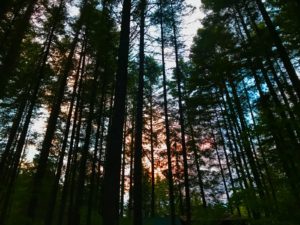 We tried to pass that way but going uphill it became too difficult.  Going downhill though we thought we’d give it a try and cut off about 3/4 of a mile of walking, plus gain a little adventure and training for our 6 year old.  We repelled down the side of the cliff/mountain, grabbing onto whatever limbs/trees/branches we could.  It was quite difficult, but still fun and it saved us some time for sure.  We finally made it to the bottom of the trail ready for a snack!

Due to the weather, outside of the few hikes mentioned here, we spent a good bit of time looking for GeoCaches.  There are so many in the area, it made it quite fun.  It got to a point where anytime we would slow down the car, my son would flip his seatbelt out and yell out “are we geocaching??”.  Up next Mt. St Helens, Packwood Area, and Yakima.